A dreadful disquiet stirs in society right now. And yet by the looks of the art world, many don't care. Perhaps the problems have overwhelmed us or we've grown accustomed to unrest. Maybe we're feeling so removed, we have finally reached a point where we are beside ourselves.

If you consider this country's leading people in power and prominence — our celebrities, politicians, and media men and women — now would seem the perfect climate for a show of caricature, the art of extreme distortion. Society already seems to be a grotesque caricature of itself.

That's why I was excited to hear about such a show, let alone one juried by Draper Hill, a well-known local political cartoonist who worked for The Detroit News for 15 years. Here, I thought, the art will be hot. At Grosse Pointe Art Association, Hill presents an exhibit of caricature, satire, comics and cartoons featuring a few dozen works by 14 artists.

Unfortunately, hot it's not. The grand-prize winner was George Bay's "Tortoise, Nude ... Freshly Laid Rock." According to Hill, the sculpture of a turtle, made from found, carved burl and granite rock, "looks like a wandering brain that is suddenly out in the sunshine." Why did Hill think it deserved the grand prize? "There was no way that massive egg could have been laid by the turtle," he says. "It was a nice leap of the imagination."

Creative, sure. Well-executed? Definitely. But a turtle on a rock? You really can't get much further from the edge.

According to the gallery's handout for the exhibit, "The lure of wild power without responsibility" drew Draper Hill to creating political cartoons. So I wonder why the majority of work here has nothing to do with the current political or social climate. There are, of course, a few exceptions. Andy Malone presents Dialogue, a roll of toilet paper printed with cartoons of Mayor Kilpatrick and L. Brooks Patterson. The two politicians point fingers at each other down the paper trail, blaming one another like schoolchildren: "It's his fault!" Malone also placed second in the show for his "Smart Bomb," which Hill calls "a nice piece of physical theater." It's a recycled electronic device in which a Slim Pickens-looking Bush moves around making regular, reckless missile attacks. Nick Sousanis presents "Security" and "Show of Hands," two comic strips about the artist's own struggle with Bush's re-election and national security issues.

Rounding out the meager display of politically or socially minded caricatures and cartoons, well-known portrait artist Kenji drew up a biting image of a clenched Condoleeza Rice standing in hot water. This caricature won him third prize. But Kenjji was displeased that his subtle yet searing indictment of President Bush hadn't made the cut to be included in the show at all. That portrait features our leader standing at a podium with a calm and discerning look on his face, holding a "dummy" in his own image, actually doing the public speaking. Had it been admitted, it would have been the only true caricature of Bush in an exhibit filled with representations of animals and personified objects, even a wooden car and a painting of a pre-teen on the telephone.

Why wasn't it included, especially since the show was low on submissions? Hill offers no comment. He only says that Kenjji's Condoleeza piece worked. "It was a very effective visual simulation, and it added up, for me, to be Condoleeza." He makes it sound like not including Kenjji's Bush caricature was a judgment call on quality. I happen to agree with Hill that Kenjji's Bush isn't the best likeness — he's all chin and full lips — but isn't caricature just as much about commentary as it is quality? Maybe the artist should look for clues in the next room, where Hill displays his illustrative jabs at everyone from Saddam Hussein (holding a globe and exclaiming: "It's my ball") to "Mayor N the Hood" Coleman Young and even George Bush Sr. But nowhere to be found is a poke or prod at our current president, at a time when a few of us would enjoy seeing one, even if it's all in fun. 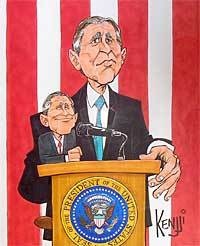