Kenjji was one of 14 local artists assembled to create a perspective on the city's gifts to music history, its economic culture and social issues.

Show Description DTroit is an exhibition of contemporary art, film and music installations which examine the creative culture of Detroit in the wake of its troubled history. In the first half of the 20th century Detroit was the model of the modern industrial city, a booming metropolis drawing a new labor force of poor southerners and immigrants in search of good paying jobs in the automobile industry.

But the brutal combination of "white flight" from the city to the suburbs beginning in the 1950s and escalating after the 1967 race riots, the recession of the 1970s and the decline of the automotive industry transformed Detroit from a thriving community into an architectural shell of desolation and decay.

Within this failed utopia of racial tension, economic segregation and urban neglect, a vibrant new generation of artists and musicians have quietly developed individual aesthetic languages that reflect the multilayered history of their home.

They are the cultural residue of the city affectionately known as "Motown," "The Motor City," "Detroit Rock City," "Techno City" or simply "The D." 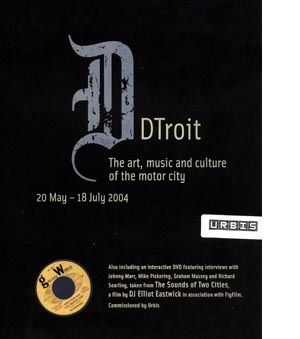