The typical comic book icon is a White man with muscles and superhuman strength. But one of the newest super heroes on the scene sports cornrowed hair and boasts about his African heritage and spiritual powers. Just call him the "WITCHDOCTOR ": Brilliant, street-wise, witty and educated, "WITCHDOCTOR : Protector of the People" is the lead character in an independently published, Black superhero series by Detroit-based artist KENJJI.

The comic represents a movement by conscious Black writers and illustrators toward creating more responsible and socially relevant images of African descendants than what mainstream book and animation companies have presented in the past. "WITCHDOCTOR " was inspired by my interest in reviving what we call independent, Black comics," says KENJJI. "An independent, Black comic is not necessarily a militant comic, but a comic that observes a cultural setting, as a premise, not a novelty. This is where our comics come from.

KENJJI, 28, established Griot Comics as a vehicle to support the vision he shares with a group of other writers and illustrators. Atlanta-based Dawud Anubwile, creator of BrotherMan: Dictator of Discipline," Jeremy and Robert Love, co-creators of "GettoSake," originally based in New Jersey, and the comic publishing company Milestone Media are among the Black creators. Locally, Urban Style Comics also distributes superhero stories of interest to people of color.

"WITCHDOCTOR " focuses on the experiences of Dr. Jovan Carrington, a psychiatrist who uses his super powers and knowledge of voodoo to aid the less fortunate and fight off a host of unsavory villains. "I came up far from here, overseas in Africa, in many nations, in many cities," the character says. "My father and his anthropological studies brought unusual fascinations to my youth, fostered my inquisitive mind, fed by considerable imagination, opened the path to my vision."

KENJJI says he wants "WITCHDOCTOR " to expand the understanding of readers and expose them to positive African values. "Once you understand the premise of voodoo and apply it to this hero's experience, you get a much more involving action experience," KENJJI says. "It entertains you while it shares with you the possibilities of what is taught by ancient theologies and African tradition."

The artist began creating comics in 1992. His first book was "Eden," a cartoon set in futuristic Detroit, following a global catastrophe that reduced American to the dark ages, with no electricity or similar modern resources. He published the series from about 1998 to 2000. KENJJI, who studied illustration at Western Michigan University and the Center for Creative Studies, where he presently teaches, provided cover art for record labels, such as techno musician Carl Craig's Plant E.

With the creation of the "WITCHDOCTOR " series, which KENJJI says will probably include as many as 10 serial publications before moving into graphic novel format, he found a clear direction for his work. There have been comic books that entertain and send a message about the problems facing Black, such as stories that feature superheroes killing drug dealers. However, KENJJI says most fail to address social barriers and other everyday situations confronting people of African descent. But not the WITCHDOCTOR. He battles bad guys and bad stereotypes as he uses his supernatural vision to enter a world that isn't always so kind to Blacks.

"The reason it's important to me became very clear just a couple of months ago," says KENJJI. "Bill Jemus, president and CEO of Marvel Comics, was criticized for using a racial slur in his "Marvaille" comic book, but Jemus offered no apology. "This is the type of stuff that, I'm afraid, you can't be surprised by in mainstream media," he explains, adding that racist characters have also appeared in popular animated action TV shows, like "Dragonball Z". KENJJI, who instructs after-hours at Nataki Talibah Schoolhouse, a local, African-centered charter school, says there is a new generation of Black comic book readers.

"What Black comic artists are trying to accomplish is, five, 10 years from now, we'd like to have a movie like Spider Man, but with a character who has a sincere devotion to our community," Kenjji says. 'We're struggling against an industry that makes (racism) tolerable and makes that profitable. " 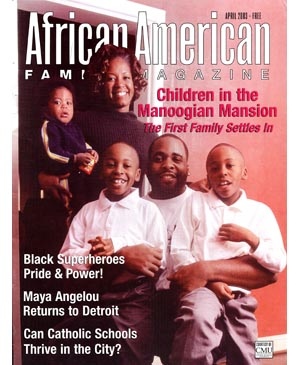