The soft-spoken demeanor of Kenjji amplifies when he speaks about his favorite projects, particularly comic book design. This Detroit artist's Earth-toned comics are rich with themes of what he calls "ethnic-focused books." "There should be a lot of books of this nature," he says. "My point isn't to do the only one." Kenjji's idea is of a new kind of icon, breaking traditional superhero stereotypes. His upcoming online and print series, WITCHDOTCTOR, is designed to dispel fears people have of the Haitian-based Voodoo religion and focus on the reality of Vodun culture. His work the interactive comic narrative, EDEN continues to draw worldwide attention, with electronic music adding sharpness to the post-apocalyptic experience with tracks by Theorem, Recloose and Sean Deason.

"People are excited about the electronic music - there's talk of bringing in other local artists to the comic realm," says Kenjji, who has done artwork for Recloose, Binary Star and hip-hop's Subteranneous Records.

"There's stuff going on in my art that you've got to pay attention to," Kenjji hints with characteristic nonchalance. "There's frequently the hidden agenda too. Look for it and pay attention." 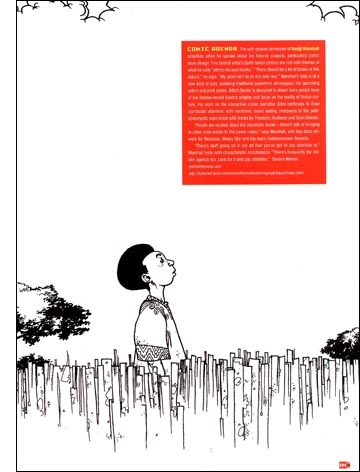