This dynamic page features the first appearance of the Infamous Overseer as he snatches a nearly free boy out of the sky. Avid readers may find the scene similar to the capture of Nat Turner's mother in Kyle Baker's graphic novel. Although the sequence was not interpreted directly, Kenjji decided to keep the page as an homage to Baker. (He welcomes any accusation of "biting Baker's style" as an indication that the accuser has read - and hopefully purchased - this must-have collectible.)

Kenjji met Kyle Baker at the 2007 East Coast Black Age of Comics conference. Kenjji praised the artist as a key influence and applauded his work - Nat Turner in particular - as "brave and bold." 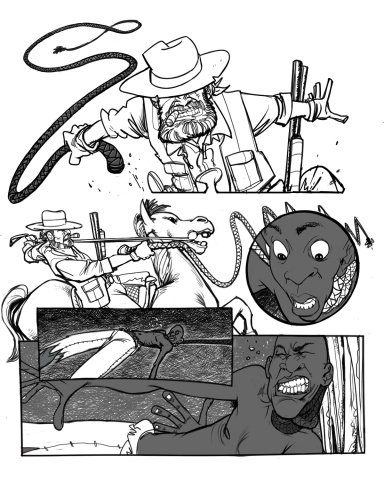 Cracking the Whip
< previous next >